Adventure, Food, & Politics Around the World

About a year ago I went to Laguna Beach Wilderness Park and took the short hike to Barbara’s Lake. Except it wasn’t a lake any longer. Instead, a dry and cracked crater sat dying in the hot sun due to the unrelenting and uncompromising California drought, which lasted five years.

Now as I walk over the reborn lush hills of the expansive green trails at Laguna Wilderness after our recent wet winter, across the 133 highway I can see a healthy natural lake filled only with the rain that has fallen over that last few months. Along the hills of the Wilderness Park, there are yellow poppies again, there white carnations, there are sunflowers, there are spots of light brown wheat along endlessly rolling hills drenched in a deeply satisfying verdant green that is being devoured by orange weeds that kill the healthy plants and flowers. A large lizard, larger than I would have ever come across a year ago, crawsl across the trail and relaxes while sun bathing with its head on a rock, a baby scorpion crawls into the grass, colonies of huge red ants organize around their homes, and a falcon soars overhead. The hills are brimming with life after being dead for so long and it feels good to have them back.

The change is remarkable. For the entirety of the drought, it was as if the people of Southern California had forgotten what our home is supposed to look like. Or maybe they ignored it completely while they worked odious day jobs and spent the rest of their time worrying about a hopelessly corrupt presidential election. While the people continued to hate their lives, our home rotted in the parched air and oppressive sun. It is supposed to have green hills, beautiful and tiny yellow flowers, and healthy light brown soil, but for the last half a decade we’ve been forgetting what our home is truly like as we were surrounded by the ugly cracked dark brown dirt and dead hills that suffocated the colorful flowers and left no food for the insects to begin the food chain in which we are dependent.

Pondering the weight of this and walking up to the water on the short but pleasant trail, it is a deep blue that isn’t reminiscent of the cracked lake bed I had come to before. Ducks float on the pond, a young man is attempting to fish but I don’t have the heart to tell him there aren’t any fish in the lake. Families pass the lake on the trail enjoying their Sunday, and the shining sun hangs triumphantly above it all. This time there is moisture in the air right after the deluge of rain just fell to the Earth, and the area rightfully restored to its inherent beauty.

As I leave the lake, I worry that the drought will return again. The climate is warming and shows no sign of slowing down. Now that I have the beauty of my home restored back to its original glory, this time I won’t take it for granted.

When I return home, I see gorgeous white, black, brown, and grey moth  reminds me of the resilience of the natural world. 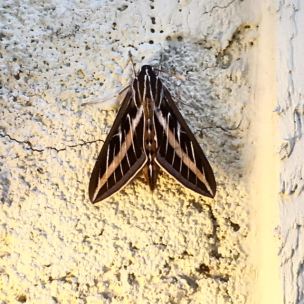